Blowing the Shofar Atop the Blue Ridge Mountains 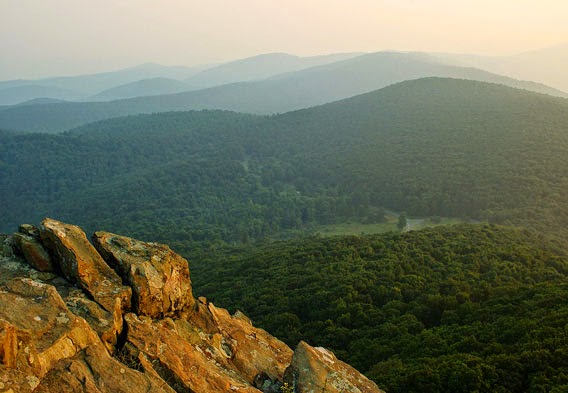 This past Sunday I finally spent some quality time with a Messianic man who really loves the shofar.  We met up early in the morning at a mall parking lot.  And then together we started the long drive to the mountains.

He likes to go up to the Blue Ridge once a year, to blow the shofar and pray.  He had invited me this year after a mutual friend had introduced us.  On the way there, he told me about why likes the Shofar.  It was apparently the sound of the shofar that jarred him out of his spiritual slumber and set him on a path to learning about the Messianic faith.  Long story short, up until a few months ago he was a pastor at a Christian church but now he wants to start a Messianic ministry, the symbol for which is going to be the shofar.

He's a very interesting man.  About 60 years old, African American, and extremely charismatic (in every sense of the word).  He meets all kinds of people because he's always visiting churches and asking for permission to the blow the shofar.  And then that naturally opens up all kinds of conversations.  In fact, we were on our way to meet up with some of those people.

As we approached the foothills of the Blue Ridge, we met up with a group of Latinos who spoke very little English.  They followed us the rest of way.  When we finally stopped at the first overlook, I noticed that they had their own shofars.

At one point, my Messianic friend spoke about the importance of sounding the shofar.  And he said one thing that I've been thinking about ever since.  He mentioned the shofar blowing in the story of Jericho and said something about how the walls of Jericho were a metaphor for dark spiritual forces.

So what exactly does the shofar do?

Here's an interesting article I came across today that provides a wealth of information and Scripture references on the subject.  The answer to the above question might surprise you...