I just finished reading a book that is attempting to do for the Ephraimite Movement what Theodor Herzl's book "Der Judenstaat" did for Zionism.  Some of what it says is good...other portions are very troubling indeed. 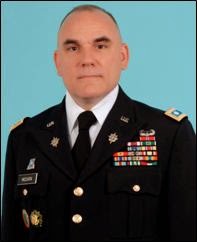 As you can see, he is a well-decorated ex-military officer.  And we can all be very thankful for his many years of service to our country.

Here's the book which, you will note, displays a proposed national flag for the Ephraimite Nation: 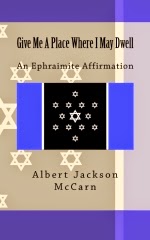 So let's get into it.

Every book is about a problem and a proposed solution.  This book frames the problem something like this:

You very well could be a descendant of the 10 Lost Tribes of Israel which means that you're living in exile from your homeland (the tribal territories of the Northern Tribes of Israel), deprived of a sense of national community with your people--the Ephraimites, suffering from the onslaught of increasingly hostile, anti-Biblical culture in your host country or even outright oppression.

But there is hope for you to rejoin your lost community and reclaim your birthright to the Northern Tribal Territory of Israel:

You can help restore national consciousness to Ephraim by (1) envisioning the kinship you share with other Ephraimites all over the world and (2) joining many others in a mass exodus from all of their various host countries as they embark on an epic quest to reclaim the "land of the fathers."

The first point he makes is that G-d did not promise the Land of Israel exclusively to the Jews.  He takes several pages to explain that G-d promised the Land to Abraham's descendants and that when the Land was officially given to the nation of Israel, in fulfillment of that promise, the nation consisted of more than just Jews (i.e. the Tribe of Judah).

So then the question becomes:  what ever happened all of those non-Jewish tribes to whom belong significant portions of the Land of Israel?  While there exists an identifiable Jewish community, there is presently no identifiable community representing the Northern Tribes of Israel (i.e. Ephraimites or "House of Israel" as opposed to "House of Judah").

But there's a solution:  "...the Ephraimite nation...may be...envisioned into existence."

He offers 3 elements that must be met in order for someone to belong to the Ephraimite nation:

He lays out on pages 34-35 a genealogy that shows how most people are descended from ethnic Israelites.  'Ethnicity, or physical descent, does therefore compose one of the identifying features of our Ephraimite community."  He adds, "That, indeed, is key to our national definition..." [emphasis added].

"...the third component of Ephraimite identity is an adherence to G-d's Torah."  He explains that this does not mean perfect obedience but rather an acknowledgment that the Torah is still the foundational guide for our way of life.

Having defined the in-group, he goes on to define the out-groups.  Muslims are obviously out since they deny the Messiahship of Yeshua;  Christians are out because, though they may have Israelite descent, and though they profess allegiance to Yeshua, they reject Torah as G-d's standard for their lives; non-Messianic Jews are out because they reject Yeshua's Messiahship.  Lastly, he says 'But what of those who are not physical descendants of Ephraim, but do profess faith in Yeshua and try to keep Torah?"  He answers that such a person only becomes an Ephraimite if he rejects his prior ethnic identification and affirms a specific tribal identification within Israel.  For this point, he cites to the case of Ruth as precedent.  Finally, by way of application, he announces:  "Let all the world know henceforth that I am an Israelite, of the House of Joseph, of the Tribe of Ephraim.  Who will join me and other committed Israelites in reconstituting our nation of the House of Joseph?"

Anticipating the threat this nationalized brand of his particular version of Two House Theology poses to the Modern State of Israel, he is quick to add:

"Before going further I must state emphatically that the Ephraimite movement has not intention of usurping the sovereignty of any existing state.  Regarding the State of Israel in particular, we have no desire to infringe on Israeli territory."

And this I would like to believe.  However, he says elsewhere:

"There is no need to hide our hope and expectation that the L-rd will establish all of our people within the borders he has promised,"

"We cannot consider permanent settlement anywhere other than the ancient land promised to our forefathers...Much of [the Promised Land] is already under the sovereignty of the State of Israel,"

This is the foundation that will serve to educate the youth via trips to Israel about their "birthright" to the Northern Territory of Israel.  And he specifically uses the term "birthright" to define how an "Ephraimite" should view the tribal territories that belonged to the ancient Northern Tribes.

On page 98, McCarn says something good:  "There is a place for compromise..."

And he says on page 28 that "the world's Jewish population contains elements of all the tribes."

This is a good place to begin.  Can we agree, given that Jewry contains elements of all the tribes, that modern Jewry has a right to the entire Land of Israel--even "Greater Israel"?

I hope that Mr. McCarn is willing to compromise on this point.  Because I feel that a guiding principle to any viable Messianic Nationalism must be the recognition of the Jewish right to the entire Land of Israel (even Greater Israel).

The next issue where compromise should be sought is the definition of nationalism itself.  McCarn has proposed an ethnocentric basis for membership in the nation thus characterizing it as an Ephraimite Nation.  Put another way, McCarn excludes the possibility that the greater family of Israel contains non-tribally affiliated members.  Yet there are many Messianics, myself included, who claim no tribal descent and base our identity purely in covenantal terms.  So I propose, as a compromise, that we identify purely in covenantal terms--as followers of Yeshua.

Now, I realize that this latter proposal means that Gentile Believers will have to approach the Land more humbly and without any sense of entitlement.  Indeed, we will be the least in the Kingdom and can only hope for the extra-tribal portions of the Land that once belonged to Edom and Moab and various Canaanite city-states.  In short, we could only hope to form a protective barrier around the entire Tribally-allotted territory of Israel.  And I say "hope" because we would only be able to live in those parts if (1) the Modern State of Israel enlarges its territory and (2) for some reason (perhaps for national survival) allows us to dwell in those outer regions of Greater Israel.

And now I'd like to open things up for anyone to share their thoughts.  Any brave souls out there?  : )