Stop the Press! Mainline Christian Scholars Beginning to Promote the Torah of Moses 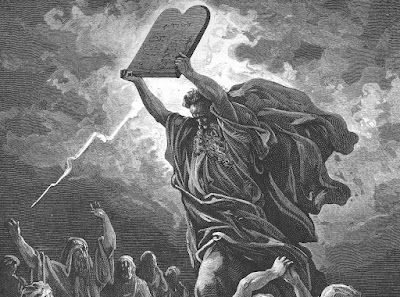 "I am keenly aware that in proposing [that the Torah of Moses is valid for Christians] I have guaranteed for myself a limited hearing," Daniel I. Block, opening line from his essay entitled "Preaching Old Testament Law to New Testament Christians" found in the book "The Gospel According to Moses:  Theological and Ethical Reflections on the Book of Deuteronomy"

What follows are my notes on Daniel I. Block's essay entitled "Preaching Old Testament Law to New Testament Christians."  I just read this today and was astounded that a Christian would be promoting the Torah of Moses to fellow Christians.  And not just any Christian but he happens to be a professor of the Old Testament at Wheaton College.  Friends, this is G-d at work in Christendom, changing it into something new.  Enjoy:

Block claims to have figured out why Christians believe the Torah is not relevant.  They think it's a bunch of boring rituals made obsolete by Christ's sacrifice on the cross, laws that are hopelessly out of date and inapplicable to modern times, unduly harsh laws that are grossly inferior to the "law of love" announced by Jesus, encrypted in an antiquated literary form that would be impossible to understand in our modern age, and representing a view of G-d that is objectionable to modern sensitivities.

But, he says, these misconceptions about the law arise from fundamental ideological and theological prejudices against Old Testament law.  He first traces these prejudices to the 2nd century heretic Marcion proclaimed a radical discontinuity between the Old and New Testaments, Israel and the Church, the G-d of the Old Testament and the G-d of the New.  Then he identifies three current streams of prejudice:  the antipathy resulting from the Lutherian law-gospel contrast, the dispensational idea that the church age with its dispensation of grace is fundamentally different from the Israel age with its dispensation of law, and, finally, the New Covenant Theology rooted in Reformed Theolgoy which says that Mosaic Covenant ended when Christ instituted the New Covenant.

Because of these misconceptions and interpretive traditions, most preachers don't preach from the Old Testament but if they do they say that the Law is irrelevant for three reasons: (1) the atoning work of Jesus Christ liberated us from the "curse of the law" (Rom. 3:21; 6:14; 7:4; 10:4; Gal. 2:19-21; 3:23-26; 4:21-31; Heb. 7:12); (2) the word telos in Rom 10:4 is taken to mean "termination" of the law; (3) Christians pick and choose the laws they feel they should keep by differentiating between ceremonial, civil, and moral laws.  Block points out that no attention is given to the option of theonomy which views the Old Testament law as fundamentally in force even for the church.
These interpretive traditions he considers remarkable given that Jesus declared the permanent validity of the Law in Matthew 5:17-20 and in light of His declaration that love for Him is demonstrated first and foremost by keeping His commands (John 14:15; 15:10).  Also by Paul's assertion that it's the doers of the law who will be justified (Rom. 2:13).

Next, he questions how Christians can read "All Scripture is breathed out by God and profitable for teaching, for reproof, for correction, and for training in righteousness, that the person of God may be competent, equipped for every good work" (2 Tim 3:16-17) as an assertion that Mosaic law is not a requirement but rather as an "optional sourcebook for optional lessons."

So then Block attempts to dispel the misconceptions and antipathy by examining the nature of the Law, the literary context of it, and what the law meant to the "Old Testament Saints."

How did the genuinely pious in Israel, the "Old Testament Saints", understand the Law?  He provides several answers:  (1) they perceived obedience to the laws, not as a precondition to salvation but rather as the grateful response of those who had already been saved; (2) they perceived obedience to the law as an expression of covenant relationship--obey the voice of G-d; (3) they perceived obedience to the law as a precondition to achieving the mission to which they'd been called and the precondition to receiving blessing.  The first point he says is highlighted in Exodus 19:5-6:  if Israel will keep G-d's covenant and obey His voice then she will be G-d's special treasure, His kingdom of priests, His holy nation (Deut. 26:16-19).  The second point is spelled out in Lev. 26:1-13 and Deut. 28:1-4; (4) being able to hear what the G-d of Israel wanted was considered a unique privilege compared to the gods of the nations who didn't speak.  They were thankful to know with clarity and confidence what G-d wanted for their lives; (5) they perceived true obedience to the law to be the external expression of an inward disposition of fear and faith in G-d and love for G-d; (6) they perceived the laws holistically, viewing all of life as under the authority of the divine suzerain.  Whereas many Christians think of the Torah as divisible according to moral, civil, and ceremonial, this classification fails to appreciate the nature and organization of the laws themselves.  Thus, they never questioned "which" laws to keep but rather "how" to keep the laws; (7) while they believed the commandments were achievable, it was also understood that G-d, recognizing their propensity to sin, had provided a means for forgiveness and communion through the sacrificial and ceremonial ritual.  Block then appears to identify the church with Israel by saying, "There was no time in Israel's history when every Israelite was truly devoted to [Adonai] in this sense.  For this reason, within the new Israelite covenant, Jeremiah anticipates a time when the boundaries between physical Israel and spiritual Israel will be coterminous and all will love God and demonstrate with their lives that his [Torah] has been written on their hearts (Jer. 31:31-34)."

Block says the first thing to keep in mind is that Scripture says obedience to the Torah gives life and well-being.  "In Lev 18:5, [Adonai] declares, 'Keep my ordinances and laws, for the man who obeys them will live by them.  I am [Adonai].'  Similar statements are found in Ezek 20:11, 13 and Neh 9:29.  The Psalter begins with an ode to the life-giving nature of the law (1:1-6), and Psalm 119, by far the longest piece in this collection, is devoted entirely to teh positive nature of the law.  References to the relationship between keeping the law and well-being are common:  vv. 17, 40, 77, 93, 97, 116, 144, 156, 159, 175.  The basic Old Testament stance is summarized by Habakkuk in 2:4, which, in context, is best interpreted, 'As for the proud one, his person [nefesh] is not right on the inside; but the righteous in his faithfulness shall live.'  Ezekiel offers an extended exposition of this notion in 18:1-23.  After describing the ethicial behavior of a man, on behalf of [Adonai], he declares, 'He is righteous; he shall surely live' (v. 9).  After describing the unethical behavior of his son he declares, 'He has committed all these abominations; he shall surely be put to death' (v. 13).  Later he declares that if a wicked man turns from his wickedness and observes all of [Adonai's] ordinances, and practices righteousness and justice, 'he shall surely live' (vv. 21-23).  The assumption in each case is that the outward actions reflect the inner spirit of the person, on the basis of which a judgment concerning the spiritual status of the person may be made and the sentence of life or death rendered."

Second, Block points out that later revelation cannot correct earlier revelation as if there was a defect in the earlier revelation.  "Later revelation may be more precise and more nuanced, but it cannot be more true.  Accordingly, Paul cannot be interpreted as correcting Moses..."  In reality, says Block, Paul was responding to an incorrect approach to law--not the law itself.  To those that thought the law was the means of salvation, Paul indicated that this way of thinking would lead to death.  He never intended to contradict Scripture and say that the law itself leads to death.

Third, Christians should not imagine that the law written on their hearts is different from the law revealed under the old covenant.  "Jesus said, 'If you love me you will keep my commandments' (John 14:15), and 'Whoever has my commandments and keeps them, he it is who loves me.  And he who loves me will be loved by my Father, and I will love him and manifest myself to him' (14:21).  In lifting these statements right out of Deuteronomy Jesus identifies himself with [Adonai] in the Old Testament.  Furthermore, his use of the plural ['my commandments'] presupposes a specific body of laws with which the disciples are familiar.  Here Jesus does not say generically and vaguely, 'If you lvoe me you will do as I say,' as if this refers to marching orders for the future."

So once a Christian accepts that obedience to the law is not a renunciation of grace but rather the grateful response of one who desires to walk in conformity to the will of G-d and that the law is not a collection of harsh laws from a different G-d from long ago--the G-d of the "Old Testament" but rather instructions for how to live the way of life that G-d approves, then the Christian is still left with the monumental question:  how am I supposed to apply Old Testament law to my own life?

Block first suggests that Christians take 2 Tim 3:15-17 as the starting point, "recognizing that this statement not only affirms the reliability of the Old Testatment as divinely breathed Scripture, but especially that it is ethically relevant and through its application God creates a transformed people."

Second, one must recognize the theological and ethical unity of the "two Testaments."

Third, Paul's call for obedience to the "law of Christ" (1 Cor 9:21; Gal 6:2) and Yeshua's call for adherence to the "commandments" cannot remain vague and empty, subject to anybody's personal and subjective interpretation.

Fourth, it should be understood that many laws refer to a broad category of commandments.  For example, the law requiring parapets on houses (Deut 22:8) should be construed as requiring the heads of houeholds to ensure the well-being of all who enter their property and homes (e.g. keeping sidewalks clear of ice during the winter time).

Fifth, the social and theological underpinnings of laws should be investigated so that they can be applied as principles to our own cultural context.

Sixth, "seize the underlying principles of those  [laws] that are culturally and contextually specific and apply those principles to the contexts in which we live.  It is impossible to establish the particular kind of haircut Lev 19:27 seeks to ban, but is not difficult to identify parallel contemporary practices that need to be reined in....forms of dress that represent un-godly values."

Block ends his essay by adding the caveat that "[t]he problem of applying Old Testament laws to contemporary contexts is much more complex than these few summary statements would imply" and reassuring his readers that he is not advocating any kind of works salvation.  Rather, salvation should result in a life that conforms to the will of G-d.