Why Was Pharaoh's Daughter Called a "Jewess"? 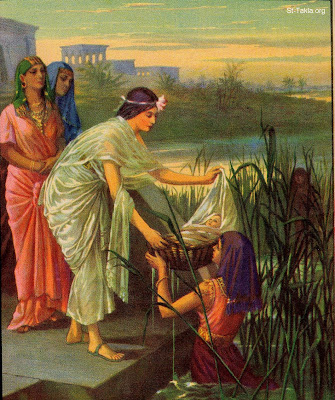 "R. Simon b. Pazzi once introduced an exposition of the Book of Chronicles as follows:  'All thy words are one, and we know how to find their inner meaning'.  [It is written], And his wife the Jewess bored Jered the father of Gedor, and Heber the father of Socho, and Jekuthiel the father of Zanoah, and these are the sons of Bithya the daughter of Pharaoh, whom Mered took.  Why was she [the daughter of Pharaoh] called a Jewess?  Because she repudiated idolatry, as it is written, And the daughter of Pharaoh went down to bathe in the river, and R. Johanan, [commenting on this,] said that she went down to cleanse herself from the idols of her father's house. 'Bore':  But she only brought him [Moses] up?  -- This tells us that if anyone brings up an orphan boy or girl in his house, the Scripture accounts it as if he had begotten him.  'Jered':  this is Moses.  Why was he called Jered?  Because manna came down [yarad] for Israel in his days," Megillah 13a.

I'm quoting this here in full because Dan earlier said I was making up the fact that the Rabbis believed "rejection of idolatry=Jewishness" applied to Gentiles.  They clearly did have such a tradition as the above quote shows!
Posted by Peter at 4:48 AM